As some of you know I have been in Fontainebleau for the past few weeks and it has been a blast. A lot of climbing, despite the constant bad weather. Everything went well until a coupe of days ago. I started to feel strong again and crushed a few hard problems here. I was thinking of trying harder boulders since my trip was close to it's end. Unfortunately, I have the feeling that I won't be able to climb that much anymore... -->


I leave on the 20th, back to Finland to spend Christmas at home, so I won't even have time to heal my skin before I leave. But hopefully I'll get to come back here and try to finish off some of the many projects here.

Even tough I won't be able to climb anything now, I still think that my trip has been a success. I've made new acquaintances and also plans to climb with them next year.

Here's a few of the climbs that I have been able to send during my trip to Font;


Quick update from my trip to Switzerland and Austria

I arrived here two weeks ago and met up with Daniel Woods, Courtney Sanders, Sean McColl and Paul Robinson. I was really excited about climbing with all these amazing climbers! Everyone climbed hard boulders but especially Sean took it down by crushing New Base Line, The Dagger and Big Paw in a quick manner. And almost a week ago he left Swizzy and went on to Kranj for the lead worldcup. I honestly wasn’t even surprised when I read from the news that he had won the comp. He looked so strong and confident whilst climbing with us that he would for sure do well in Kranj. Congrats Sean!

Yesterday was the first time I went bouldering to Silvretta, Austria. We drove up and it was soooo cold out there. My toes were frozen after just half an hour of being outside. First we headed to Niviuk 8A for some warming up. I did a few pull ups from some jugs and thought that I won’t get any warmer than this. I got lucky and climbed it on my flash go. I couldn’t feel my fingers after the couple first moves, but decided to still go for it! Next in line was a really cool 7C+ called British Airways which both me and Paul flashed. After that we started working on the main attraction, Anam Cara 8B+. We both did the moves pretty fast and started trying it from the beginning. I managed to do it quickly. It only took me four tries and I believe it was the sixth ascent.


Guntram Jörg also joined us a couple of days ago. He has been climbing really well during the last couple of months and it was really cool to see him in action. He sent Big Paw today and it looked effortless! An hour or so after Gu’s ascent, Daniel did it as well. It was impressive to watch them both on it. It get’s me all hopped up and excited to try hard stuff too!


We will all be heading to Fontainebleau in the beginning of december. I’ll try to post something on my blog if something comes up.

Here’s a small list of the things I’ve done during the past two weeks:

Voigas 8A+
No Mystery 8A
Schule des Lebens 8A+
Arete with a Pocket 8A
Dreamtime stand 8A+
No name 8A
Rosswell 8A+
Amber 8B
Teamwork 8A
Niviuk 8A, Flash
British Airways 7C+, Flash
Anam Cara 8B+

A few weeks in Fontainebleau, France

Hey y'all!
It's been a while since my last post. But since then, nothing really happened? So you guys haven't missed anything.
This spring I went to Fontainebleau for the first time and it was magnificent! There really is nothing like it! We were quite a few people from Finland, so that made the climbingscene even more enjoyable. Great friends and perfect climbing climbing. What else do you need? :P
I also went to Melloblocco in the beginning of this month. It was a amazing happening! I've never seen so many climbers in one place at the same time. Incredible :D. And to top the good weather, beautiful scenary it so happens that I came 3rd on the competition by climbing 5 out of 8 boulders and flashing 3 of them. It was a total surprise that I managed to do so well!
Here are some pics from random Fontainebleau boulders: 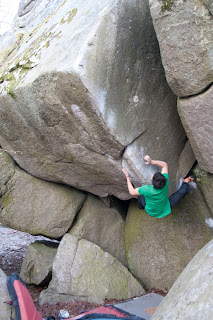 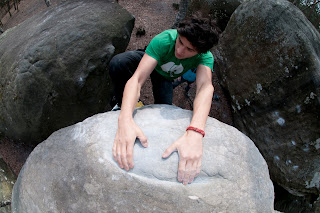 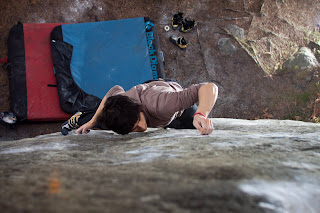 Concentrating on the small holds of Duel 8A, Photo by Kuutti Heikkilä 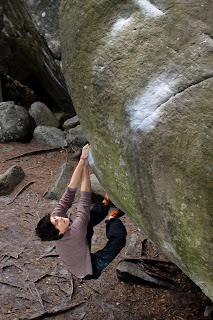 Trying Karma, Photo by Kuutti Heikkilä
Here's also a short flick my friend filmed during the trip! Check it out! :D

It's been a long time since I haven't written anything, at all. You could say that I've had a "small" writer's block after the summer, but I'll try to be more efficient during this winter period. Although, I don't think much is going to happen at least in the climbing scenes in Finland. But I figured that I could do something, now that my hard time at school has ended and I'm impatiently waiting for my final results and my trip to southern Switzerland! 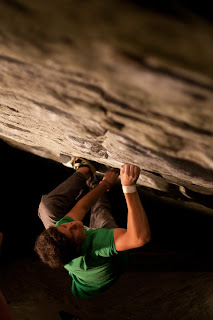 FA of Dark Sakai 8B in Magic woods, Photo by Clemens Arndt
A lot has happened since the last post. I went to a 2 month roadtrip to Magic Wood and Ceuse and all I can say that it was great! But somehow I almost liked being in Ceuse the most! Really nice french, austrian, australian, italian, norwegian, slovenian and german guys there with whom I got to climb.

The french generously borrowed me a rope and some quickdraws since I left mine with my finnish friends who left for Nice and then went back to Finland. My excuse for this, was that I wasn't sure if I'd stay in ceuse for that long. I'm glad I did! ( I also didn't have a tent... :) heh... )

Here's a small clip of what happened in magic wood during the first 3 weeks.

And here's a pic taken from Bah bah black sheep in Ceuse by one of the friendly french guys in ceuse! 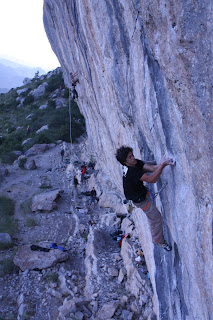 After this magnificant journey I got back home, to Finland. Accompanied by some bad weather and depressing feelings. I had a lot of schoolwork to do at the moment and also I had to study for the final exams but that didn't work out so well... Instead of studying reall hard for my exams, I decided to have fun and climb. I went to the European Championships in Innsbruck and also to the Nordic Bouldering comp in Stockholm. And I sure don't regret that. 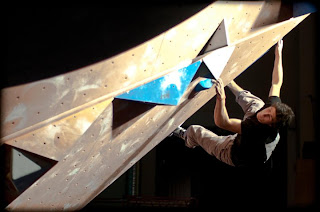 The final boulder in Stockholm, I came 3rd (pic by Daniel Väisäinen)
And just last weekend I had yet another comp. The Nordic lead comp and it was held this time in Helsinki, my hometown. The comp went well, I topped both of the qualification routes and in the finals I lost to Magnus Midtboe. I'm really happy about my performance! I mean, it's not an easy task to beat Magnus :).

Here's a link to a site where you can see some pics of the comp.

I'll probably post something when I'm in the middle of the action in Swizzy! I hope the weather will be in our side.
Lähettänyt andygullsten klo 13.21 Ei kommentteja:

Here are some shots taken by Anssi Laatikainen from Myllis. 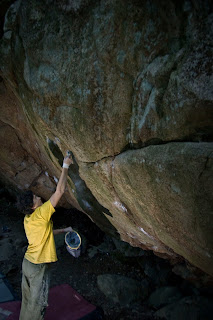 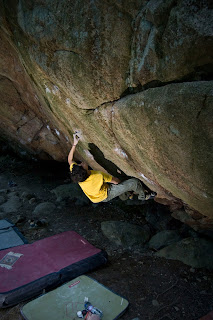 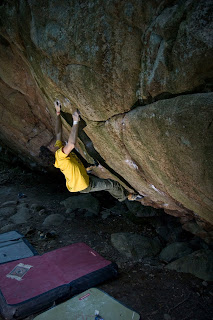 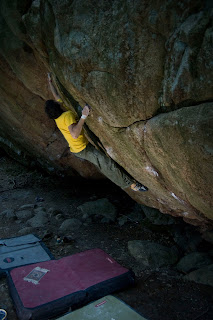 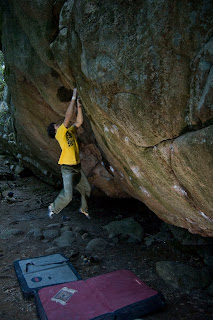 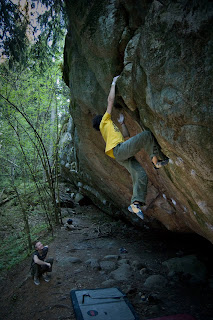 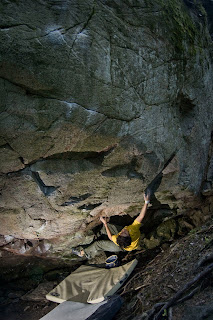 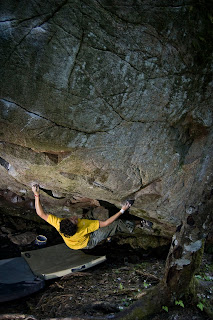 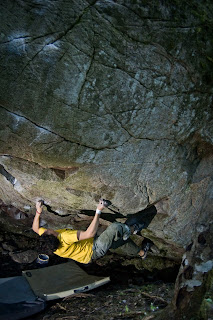 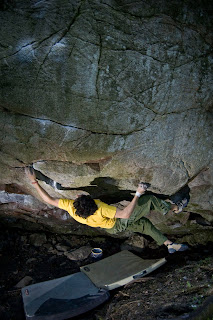 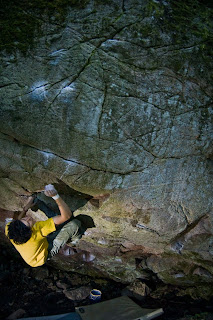 It has been raining now for a couple of days, but today was finally dry so I hope tomorrow will be a good day for climbing outside. I'm planning to go to Liljendal with some of my friends and we will probably try a problem called Pukaron paroni. I've seen a couple of pictures of the route and it looked really good!

Hope it's going to be sunny tomorrow so we can chill on the pads and climb a little if we're not too tired ;)
Lähettänyt andygullsten klo 22.25 1 kommentti:

I climbed this problem a while ago, but we decided to film it with Sakari McGregor and I can tell you that it was EPIC! First try was in a smooth rain and I had my shoes constantly wet and the friction was sh*t. The second time, which was the "succesful" day of filming was in a good +25 celciusdegrees warmth and with constant sunshine. Not so cool... But here's the clip

One Love 7c, Sipoo Finland from Sakari McGregor on Vimeo.

Today we went bouldering in Myllis hoping that it would be dry. The past week had been pretty dry and hot so there was a good chance that it wouldn't drip water like it always does.

I warmed up with the usual routes like Potsmoker, 72 markkaa and the nameless next to them and then I had my eye on the project between Potsmoker and Endless hangover. The friction felt surprisingly good even though it was around 20 celciusdegrees.

The project is very simple. It starts as a sitdown from the same holds than Potsmoker and then you have to do three really easy moves until you get a small crimp. Then you take another small crimp and jump to a relatively good but sharp hold. After that you do the same last moves than in Endless Hangover. Even if it has some same moves than the problems next to it, it's still a clear line. I named it Hattivatti and gave a grade of 8A. But the ones who will repeat it can give a better opinion for the grade.

After the proj I gave a quick burn to the traverse called Eskimo, 8A+, which has around 30 moves and ends with a 7C+ boulder. Luckily the moves felt good and I did it on my first try this season. I got quite pumped and I was really surprised that I managed to do it with such a bad endurance.

Not long after that I started working on Koopa, 8A, which is a huge dyno from two crimps to a "meathook"- jug. That didn't take long either. I think it went on my 5th try or something.

I had a very good day today and I'm psyched to go to Swizzy this summer. I hope that I'll have the same drive in Switzerland than here!
Lähettänyt andygullsten klo 22.12 Ei kommentteja: