I came back from the island of Åland a couple of days ago and now I finally have enough energy to write something on my blog. 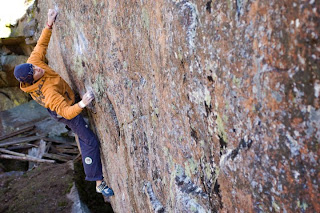 Flashing a new Highball called Luonnonvalinta in Kasviken,
picture by Alvi Pakarinen
The trip went very well and I had a lot of fun. There was a lot of nice people whom I got to know and I got to climb a lot. I climbed every day for 5 days and the result was a couple of hard ticks, fatigue and of course bloody fingers. 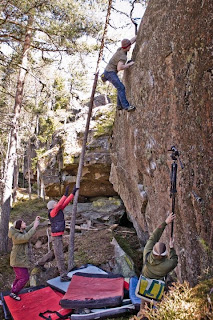 Mikko Manninen doing the FA of Luonnonvalinta 6B, picture by Alvi Pakarinen
I managed to do almost all of the routes from my want to do list, but some of them I just couldn't do. Perhaps I'm just too damn weak. 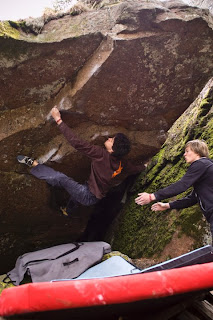 Sending Hello Africa 7C+, picture by Alvi Pakarinen
I was really close climbing Normipäivä 8B, but I fell from the very last move. It is the hardest move, but it was soooo close. Unfortunately after my best try a friend of mine broke a hold from Normipäivä. He did the last moves and got to the topjug when it suddenly came off. Luckily he didn't hurt himself. The breakage was quite predictable because it had some cracks around it, so it was just a matter of time when it would be ripped off. Later on I managed to come up with some kind of a new beta for the ending but it felt a little bit harder than before. So I'll use this as an excuse on why I didn't climb it :). 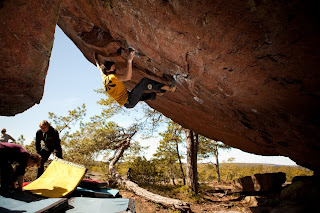 Giving a good burn to Normipäivä 8B, picture by Sakari McGregor

Saturday was probably the best day of my trip. I went to Kasviken really motivated and the climbing felt really good. I started working on Dodo assis and I did the moves quickly and then started to try it from the beginning. It felt good but I still managed to fall from the last moves... The route is really simple and clear and you can see the beta from the video below. All you have to do is stick the heeltoe. After I sent Dodo I went to Mongooli and tried to figure out a good beta for it. Luckily there was a local called Tomas Johansson who gave me some good hints for it and then I succesfully flashed it. That was definetly one of the highlights of my trip.

Dodo ss 8a+, Kasviken Åland from Sakari McGregor on Vimeo.

Here are my hardest climbs of the trip:

I had a really good time there and I'm hoping to go back soon and try to climb the problems that I didn't do this time.
Lähettänyt andygullsten klo 23.00