A day in Sipoo

Yesterday I went climbing with Kuutti Huhtikorpi and Markus Fogelholm and we decided to go on a sundaytrip to Sipoo. We weren't sure yet on which block we would climb on but we figured that we could choose the area when we'll get there.

When we arrived in Sipoo we got to the conclusion that me and Kuutti will go try Feel Good Inc. and Markus would go try One Love, 7C+. Markus did some quick work on One Love and climbed it in less than 30 minutes. At the same time me and Kuutti were cranking hard on Feel Good Inc. It felt really hard at first and it had two moist holds so we had to dry them up before every try. That didn't help at all... 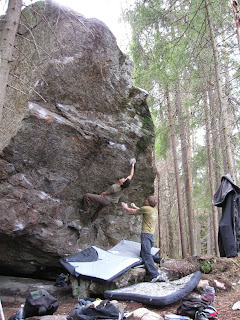 Crux move of Feel Good Inc.
After some effort and a little bit of luck I managed to do all the moves except one. A big move from two underclings to a pretty good hold. That partivular move is the third move and the two moves before that aren't that hard so I thought that I could just start working it from the beginning. 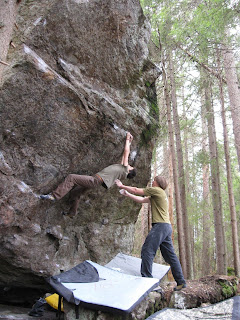 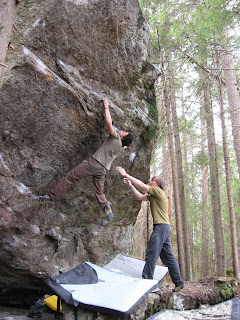 That definetly paid off :). I took some tries from the start but fell on the big move. But then I figured it out and sent the whole problem instantly. Luckily no mistakes were done on the crux section nor the ending. So cool! Another 8B on my ticklist. 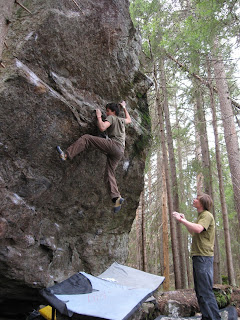 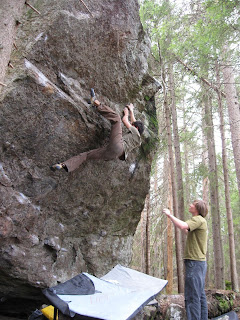 The same day we went to check out a highball project that Nalle had tried last spring. When we got there Nalle was fixing up the camera and then he did the first ascent. It looked amazing and also really scary. We were really motivated to try it also because it had some tricky looking moves and cool holds. We began to try it and Kuutti did a quick repeat to it thanks to his steel nerves. He didn't look down at any time and he just kept on climbing all the way to the top. A couple of minutes later I did the 3rd ascent.