My first 8B boulder!

I have been psyched about Hypergravity, 8B, since I saw it the first time. It was maybe about 2 years ago that I went there for the first time, and then I couldn't even climb a 7A+ next to it. But now times have changed and I'm feeling stronger every day!

I've been really motivated about all the hard boulderproblems near Helsinki, but especially about this one. Earlier this day I tried to call all of my friends who would want to go climbing outside and particularly to Sipoo. Three of them unfortunately couldn't go but then luckily Sami Haapakoski decided to go there with me. He was also psyched about trying Hypergravity so it was the perfect scenario.

I believe that Hypergravity is Finlands first 8B boulder and the first ascent was made by the notorious Nalle Hukkataival already in 2004. Soon after that it was repeated by Tomi Nytorp in 2005. Now I managed to do the long waited third ascent.

We got there quite quickly and we started warming up a little and then we went straight away on our project. We chalked up all the holds, gave them a good brush and tried all the moves. 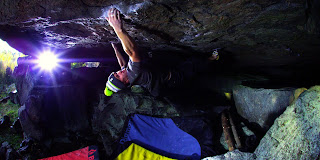 Nalle sending Hypergravity in Chuck Fryberger's newest flick CORE
It starts from and obvious box shaped hole which is inside the rock. It's big enough to get a kneebar in it, but frankly it's a bad idea. The first moves are tricky because you have to do a cool bicycle, but the hard part about it is that you don't dab. Then theres the crux. It consists about two really hard moves and 3 easier ones before you get to the jugs. It's practically over when you get to the jugs, but you still have to top it out.

After I had done all the moves, I started working on the problem from the beginning. I fell a couple of times at the start and a couple of times at the crux section. But after I took a small break it all clicked. I managed to do the first moves quite easily and then I just powered through the cruxmoves. It felt amazing. It all happened so fast and I didn't really think about it until I got to the jugs. I guess I was only focusing on the next move and the next. Suddenly I got the rush of excitement and accomplishment. I climbed my first 8B!
Lähettänyt andygullsten klo 21.39