Yesterday I went to Turku with Markus Fogelholm and Marko Siivinen right after I got from school which was at around 1 o'clock. First we spontanuously went to check out Lahnajärvi where lies a problem called Stylewars. It was completely wet and it had an at least 1,5 meter of ice below it so that the startingholds were at your feet.

That went well. So after we got back to the car and head to Mynämäki everything was going great, but of course when we got to the boulder it was dripping water from it's every hold. By then we were all getting quite frustrated about our trip but we decided to go check out Luolavuori because it is known that that block would dry really fast.

For our fortune Matahari, 8A, was all dry and we finally got to the actual climbing. The friction wasw close to perfect and we started warming up and trying the first moves and the topout of Matahari. I didn't know the sequence and it looked a little bizarre so I called Ilari, who climbed it a couple of days ago. He gave me a very good beta which he used and it also worked really well for me. A couple of tries later I got to the "crux" which was for me the move from the gaston to the small sidepull (sry, no picture). After a few falls I decided to rage it and in the end the effort payed off :).

During the same session Marko and Markus climbed the standstart to the same problem which is 7C. A good day for our crew :) Later on Ilari Kelloniemi and Matti Kivinen came also to Luolavuori and they started working on a project which is another sitstart to Matahari but from the right. It looked awsome but I wasn't that psyched about it because I had totally wrecked my skin. Still the urge of trying a new route was too powering so I had to try it. The moves felt quite easy and after a couple of tries I managed to get to startingholds of Matahari stand and from there I got to a "flow" mode and sent it. That was an exhilarating moment :D. I named it "Gipsy grooves" and the grade is in the range of 8A. I also want to thank Matti for inventing the name for it!

Still after all that, the day wasn't over yet. We had to go and try another problem called Banaanipuikkoja, 7C. The friction felt really good and it took me only 3 tries to do it. After I sent it Marko did a quick repeat to it and then did also Ilari and Markus. Not bad, huh :)

Turku has some great rock and great problems. Hope to be able to go back there soon. Just have to wait that my finger can heal a bit, that the weather doesn't mess everything up again and that some gents are kind enough to give me a ride.

Here are some pictures taken from Matahari 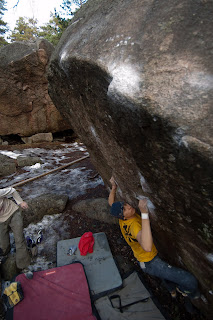 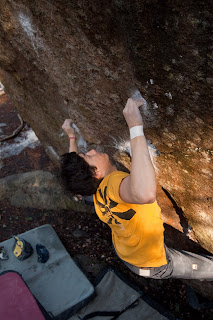 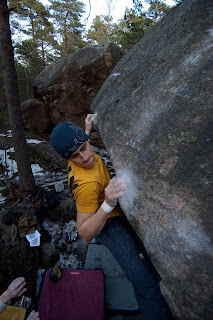 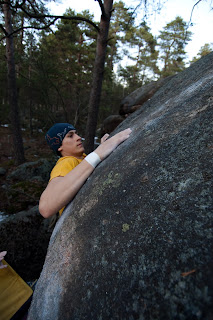