At last the good weather is starting to show here in Finland. These last days have been quite sunny and dry so almost all the boulders are starting to dry out. I've also been checking out the weather forecast and for now it's very promising. Hopefully this dry season ables us all to crank hard and send everything!

Today I was bouldering in Sipoo with Anssi Laatikainen and Sami Saxell. The drive felt really short and the walk to the boulder didn't feel either. Although we accidentally turned to the wrong road thanks to me... Sry guys :).

But after we got the rock we started warming up right away. There was some snow below the boulder so it was hard to even stand on the pads let alone falling on them. Keeping your shoes dry was clearly not an option. 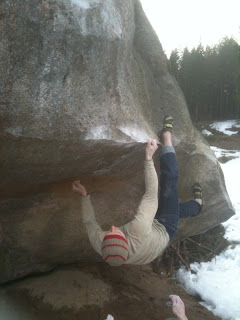 Mikko Manninen attempting "Whacking day", 7B+
After some intense warm up I managed to climb one of Nalle's routes there which is called "Whacking day" 7B+. It has some cool moves with some slopy holds and a precise heelhook. After that I was psyched about trying Globalist, and it felt hard... That didn't come as a surprise but still. I managed to do all the moves to the crux but then I got kind of shut down. There's a deadpoint to a small 2-3 finger crimp and then around 3 other moves which are also really hard all the way to the top. 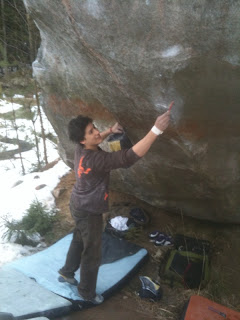 Brushing the holds of Globalist, 8B+
It's really cool to have a great project nearby. And this one feels really hard. I'm still a bit more enthusiastic about Hypergravity because I think it's more my style and it's also a little easier than Globalist. But yea, have to go there another time and maybe with some more skin and strenght. 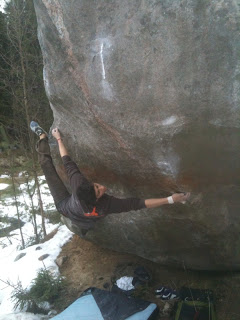 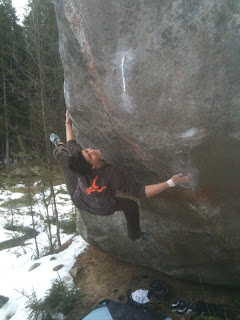 Just about to deadpoint on a really small crimp.

All pictures taken by Anssi Laatikainen and his iPhone.
Lähettänyt andygullsten klo 22.07